Success from memories of Mama’s food 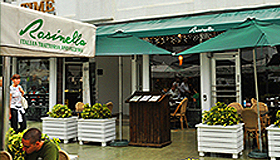 BACK TO NEWS & PRESS
By Morgan Winsor – The Miami Herald
“As far back as he can recall, food has always played an important role in South Beach restaurant owner Tonino Doino’s life.

His first food memory goes back to his childhood, in Rome. At age 5 he would spend his play time kicking a soccer ball against a won stone wall behind his home as he watched his mother through a kitchen window as she pounded out a mound of dough.

He remembers the smell of fresh basil and garlic seeping from the oven and floating into the outside air. He remembers the excitement he, along with his four brothers and sister had when racing to the dinner table to dig into their mother’s cooking.

“Mama cooks like no other,” says the now 38-year -old Doino, sipping an espresso as he relaxes into a seat inside one of his South Beach restaurants.

“Her food is so good we used to run home from wherever we were for dinner,” he said.”